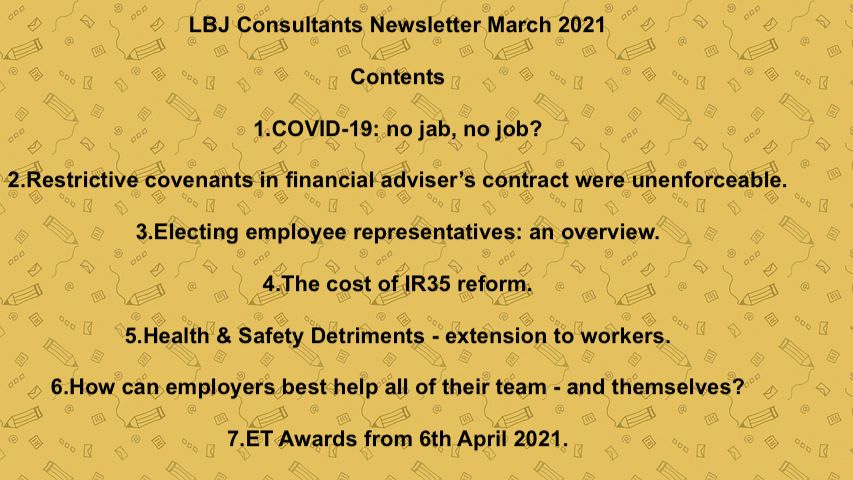 Given that the available vaccines may not be suitable for individuals with particular disabilities, or during pregnancy, a blanket policy mandating vaccination could infringe the Equality Act 2010.

Any requirement for vaccination would therefore need to be couched in terms which allowed for exceptions in cases
of disability and pregnancy. It is also possible that certain religious or moral objections to the vaccine could be a protected religious or philosophical belief, so a policy might need to have further exceptions in this regard.

Discrimination claims could also arise from the way in which employees who are unable to or refuse to get the vaccine are treated in the workplace. If, for example, certain work opportunities such as client visits are reserved for those who have been vaccinated, and an employee misses out because his or her disability prevents him or her from being vaccinated, this could amount to discrimination arising from disability. Such discrimination can be justified as a proportionate means of achieving a legitimate aim, unless there are other less discriminatory means of achieving the aim.

There are no easy fixes, which makes planning a return to the workplace a minefield for employers. Given the uncertainty as to whether the current vaccines reduce the spread of COVID-19, we can expect to see employers putting in place a range of measures, including working from home, regular testing of employees who have not been vaccinated, mask wearing and PPE, as well trying to accommodate certain workers in different roles.

In a claim of breach of contract brought against a financial adviser who joined a competing business before the end of her probationary period, the High Court holds that three post-termination restrictive covenants were unreasonably wide and therefore unenforceable. However, the Court holds that the employee breached express terms of her contract and the duty of fidelity and loyalty by copying her employer’s confidential information and attending an induction course with the competing business during working hours. The Court dismisses a claim for inducement of breach of contract against the competing business as it did not know that the employee was attending the induction course in breach of her contract with the claimant. At most, it had merely facilitated breach of confidence by allowing the employee to upload confidential information to its system.

Given the long-term decline in trade union representation in United Kingdom workplaces and the low uptake of rights under the Information and Consultation of Employees Regulations 2004, the majority of employers will not have experience of engaging with workforce representatives.

However, when it comes to collective redundancies and TUPE transfers,
there is a statutory obligation on all employers to invite employees to elect representatives where none are already in place. In this feature, we consider the circumstances in which the obligation to elect employee representatives arises, the practicalities of holding elections, and the rights and protections conferred on such representatives.

There is no generally applicable obligation on employers to inform and consult workforce representatives about issues affecting their business. The two main ways in which an employer might come under some such obligation are where the employer recognises a trade union for collective bargaining purposes, and where information and consultation arrangements are in place under the Information and Consultation of Employees Regulations 2004 SI 2004/3426 (‘the ICE Regulations’). Trade union recognition is the more common of the two but, even then, it is far from being universal in the United Kingdom.

A new survey from Simply Business reveals that a third of self-employed people affected by IR35 expect the upcoming rule change to cost them more than £20,000 – for example in less take-home pay and administration costs.

IR35 reform was originally slated for April 2020, but the government delayed the change for a year because of coronavirus.

The reform shifts the responsibility for working out a contractor’s employment status for tax from the contractor to their hirer.

HMRC hopes that this will increase compliance with the rules. In practice, many contractors believe that the change will make the self-employed less flexible – and could result in less tax for the government, harming the UK economy.

The majority of contractors we surveyed expect a significant hit to their finances as a result of the change:

Indeed, 68 per cent agreed that the financial impact on their business is their biggest concern about the changes.

The government has laid new Regulations which extend the provisions of s44(1)(d)+(e) to workers.

In plain English: at the moment an employee can claim in a tribunal if subjected to a detriment because (in simple terms) they reasonably believed that being at work would place them (or someone else, such as a household member) in serious, imminent danger. This right is found in s44 of the Employment Rights Act 1996, which was rarely used before last year but is now being used frequently by employees who are anxious about travelling to, or being in, work during the coronavirus pandemic.

This statutory instrument extends the protection so that it now covers ‘workers’, rather than just ‘employees’.  This is being done as a result of the decision in R (on the application of the IGWU) v Secretary of State for Work and Pensions, where it was held that confining such protection to employees was a breach of the EU Health & Safety Framework Directive.

If approved (and it will be), it will apply to any detriments taking place on or after 31 May 2021.

6. How can employers best help all of their team – and themselves?

Now, more than ever, we advise business owners, managers and HR professionals to examine the support they offer to their team: does it stand up to their own scrutiny and can they use it themselves?

At this very moment in time, a positive change needs to come from the top down; leading and advocating honest and open conversations around mental health and wellbeing at all levels. The use of trained mental health first aiders is particularly helpful if you need your team to know who they can go to talk to. Just remember to offer the same support to your mental health advocates!

To unlock a breadth and depth of support, you could consider partnering with a business healthcare partner. Our own Benenden Health for business package offers this organisational framework, with the support of a 24/7 mental health helpline, through to private treatment and diagnosis for physical and mental health concerns. Our deployment is quick and easy, with no medical questionnaires and a team that specialises in rolling out the benefits smoothly, whilst getting your team to buy into the investment you are making in them.